As promised, I will use this space to share my experiences visiting colleges with you. Hopefully you will find these notes useful. If you like the schools I discuss you should do everything you can to visit on your own, but this will tide you over until you are able to.

In mid-December I visited Virginia Commonwealth University, a public institution which is located in Richmond, the capital city of Virginia. VCU is located on a vibrant, exciting urban campus and has well-regarded programs in medicine, fine arts and business. Students at my school have not paid much attention to VCU, but based on what I saw, they are missing out; VCU offers a lot, and at a very competitive price. During my visit I attended an information session and took a tour and I came away extremely impressed.  I look forward to recommending Virginia Commonwealth University to my college counselees. 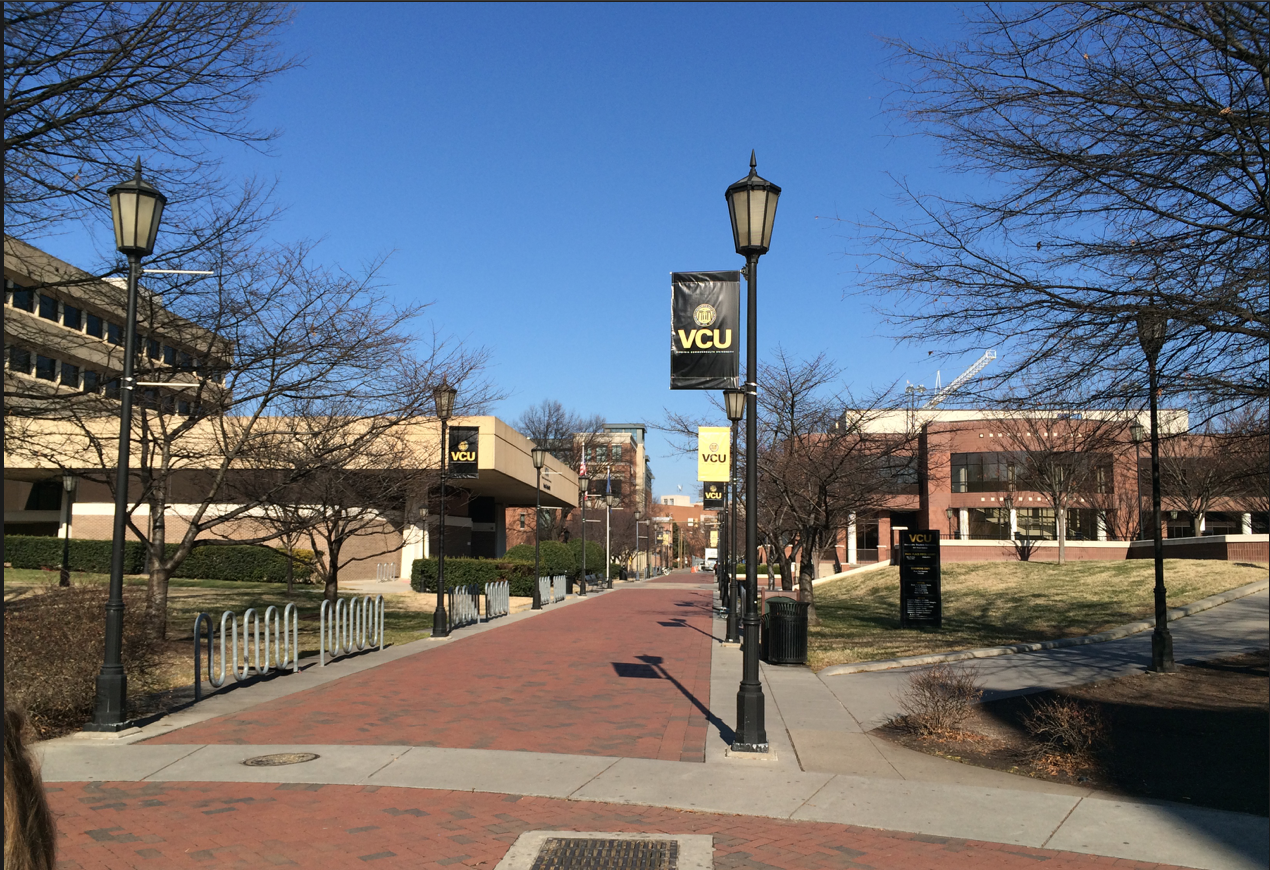 (VCU), is located in the heart of Richmond, the capital city of Virginia. As I mentioned in my notes about the University of Richmond, the city of Richmond is small to medium sized, with less than a quarter of a million people in the city proper, and a metro area population of about 1.3 million. Despite its size it offers many amenities typically found in larger cities, from effective public transportation, to multiple museums and ample opportunities for public and private sector internships. They also have excellent medical facilities, due in no small part to the presence of VCU’s hospitals. VCU was established in 1838 as a medical school; it continued to add new programs for the next 130 years until in 1968 the Richmond Professional Institute and the Medical College of Virginia merged to form Virginia Commonwealth University. VCU continues to grow to this day, recently adding a campus in the Persian Gulf nation of Qatar.

VCU’s main campus is located near Monroe Park in downtown Richmond. My tour did not cover the Medical College of Virginia campus which is across town. The campus is quite walkable and while I was there I saw a lot of construction, including a new main library addition that will open in late 2015. The campus is also car friendly, with ample on-street parking options and a wealth of parking garages available to cars with VCU stickers; all students are allowed to have automobiles, but they can also get city bus passes if they’d prefer to avoid the extra hassle of having a car. Richmond is served by Amtrak, and is easily accessible to the rest of the Eastern seaboard by high speed Acela trains, and to the world via Richmond International Airport so a car is definitely not necessary.

I visited during Winter break and consequently our tour was not able to include some elements that are usually featured on such walkabouts, most notably the dorms. However, we did walk past several of them. VCU students can live in 10 residence halls (co-ed by floor), 6 of which are reserved for first-year students. Housing is guaranteed for first-year students and for students who would prefer to move off campus, there are many inexpensive apartments in Richmond. Housing ranges from high-rise dorms like the ones at right, to smaller apartment and suite style residences. Costs vary depending on housing options and academic programs; this webpage provides a form to help estimate how much a person would pay to go to VCU. It is clear, however, that for cost-conscious Virginia residents, VCU is a great option and even for out of state students, VCU can cost up to $20,000 less per year than comparable universities.

VCU’s campus seems to be pretty security conscious. The University has 362 emergency call boxes spread across the campus, along with 90 sworn officers in their campus police department. While I was on campus I saw several VCU cops and also a Richmond police car. My tour guide said that the VCU police were “nationally ranked”  and attested that they were friendly and not viewed as adversaries by the students.

VCU has 15 varsity sports which compete at the NCAA Division I level; they are especially proud of their men’s basketball team which made the Final Four a few years ago. They also offer over a score of club sports, ranging from badminton, to lacrosse to rugby. The athletic facilities are vast and well-equipped, including the student gym pictured at left; the climbing wall is changed every two weeks to present continual challenges to users.  In addition to sports there are over 500 student activities, including such oddities as a “pancake eating club”. Any five students can form a club at VCU. I approve of this approach; when I was in college, a friend and I formed a “Yahtzee and Onion Rings” club, where we went to a local restaurant to listen to jazz, play Yahtzee and eat onion rings. It was one of my favorite parts of college, and I am glad to see a large public university embracing the quirkiness of its student body.

Students who are interested in applying to Virginia Commonwealth University can use the Common Application. VCU is somewhat selective, admitting about 64% of its applicants. During the information session I was told that new for 2014 was an emphasis on more subjective elements of an applicant’s portfolio. While it must be hard at a place that gets 15,000 applicants each year, they are now trying to be much more “holistic” in reviewing applications; the rigor of a student’s courses will be carefully considered, as well as extra-curricular activities and student writing ability. The mid-50% of accepted students last year had GPAs of 3.34-4.02. That said, standardized tests are still required at VCU and they run a wide gamut; the mid-50% of the SAT (CR and M) range from 1040-1240 and the ACT between 22-27.

The most popular majors at VCU are Biology, Psychology, Mass Communications and Criminal Justice. VCU is a relatively diverse campus, with students from over 100 countries on campus, but 85% of the student body comes from Virginia. so international students only make up 5% of the total.  I was very impressed with the racial makeup of the campus. They state that 16% of their students identify as African-American (more than twice the percentage at the University of Virginia) and all of their promotional material prominently feature people of color. Over 19% of Virginia’s population is African-American, so it is good to see one of its public universities try to match that ratio in the student body.

Currently VCU offers over 60 majors in the following 13 schools and colleges:

Students can apply to the Honors College at any point in their careers, but for incoming freshmen VCU wants to see an SAT score (CR+M) of at least 1270 or an ACT score of at least 29. These are not very difficult hurdles, and I would definitely encourage high achieving, motivated students to consider VCU’s Honors College. Honors students get special housing (with single rooms), access to extra scholarship money, early course registration, special library privileges and additional access to research opportunities. The deadline for applications is January 15, but students seeking merit scholarships should apply by December 1st. Parents should complete the Free Application for Federal Student Aid (FAFSA) by March 1st.

I enjoyed my visit to Virginia Commonwealth University.  It compares well against larger state universities (such as Penn State), while providing the added benefits of an urban location.  The campus is very artsy, perhaps due to the presence of VCUArts, the number one ranked public arts and design program in America.  Honestly, I wish I could show you the viewbook–it is one of the most creative ones I’ve ever seen, featuring numerous cutouts and clever typography; send for one and you won’t be disappointed. Despite only 15% of the population coming from outside of Virginia, I got the feeling that VCU prided itself on its diverse student body. As an example, I was pleased to see literature about LGBTQ students prominently displayed in the Visitor’s Center.

VCU combines a location in a thriving small city with a wealth of academic and cultural options for students to pursue. Despite the relatively large size of the student body VCU works hard to make sure that nobody gets lost in the shuffle; first year students, for instance, are required to meet with their advisors twice per semester, and many meet much more often. If you are looking for a large, urban college on the east coast (such as George Washington University, or Drexel University, or Pace University) I would definitely give VCU a close look. I know that I will be recommending it to my own students.