At the end of June I was in Chicago to visit some colleges.  The day after I saw  DePaul University I took the trip to Hyde Park to take a look at the University of Chicago. Besides knowing that the University is one of the most selective in the country (accepting about 1 out of every 6 applicants), I did not have a lot of information about the school.  I will share what I learned on my visit below, along with some pictures that I took on the tour. I have to note at the outset that this was about the worst tour I’ve ever been on–I can’t believe that they are always this bad; supposedly there were 215 visitors that morning, so maybe they were a bit overwhelmed.  If you are interested in the University of Chicago I encourage you to make your own visit if at all possible.

The University of Chicago has a large campus in the Hyde Park section of Chicago (South Side) along Lake Michigan.  It is about seven miles south of the Loop.  When I visit urban colleges I like to use public transportation since that is what most students will do.  To get from my hotel in the Loop (right by the Art Institute of Chicago) I took a bus ride which lasted for about 40 minutes (lots of stops).  Coming to the University from downtown one doesn’t really enter Hyde Park, but you do ride through the Bronzeville section of the city. This section was the heart of the “Great Migration” of African-Americans to Chicago in the years after World War I, at a time when the “Harlem Renaissance” was happening in Chicago just as much as it was in New York.  There are lots of historic sites in Bronzeville, and many interesting murals on buildings.  Unfortunately, it is not a prosperous area (it was the home of the disastrous Robert Taylor Homes housing project).  To get to the Hyde Park neighborhood requires going around to the other side of the campus.  Hyde Park (the home of the Obamas) is one of the most desirable upscale areas of Chicago, but it was not part of my tour. If you visit, I encourage you to take some time exploring Hyde Park.

On the day I visited the campus was the site of major renovations, which apparently happens every summer. There are no signs anywhere on campus directing people to the admissions office (which is not labeled as such) so I spent a lot of time wandering around (along with a family from New Jersey) until I found it.  On the journey I passed other people asking for directions to the library.  It is a shame that they do not have campus maps on display.

Like DePaul, Chicago uses a quarters calendar, which enables students to take more classes over four years than they would at a school using a semester schedule. In fact, the extra classes are why 25% of University of Chicago students do a double major.  One-third of classes are part of the core curriculum, one-third are in the student’s major area, and one-third are electives.  The core curriculum is a hallmark of the University, and is described in this .pdf. The goal of the Core is to give every student “a common vocabulary of ideas and skills”. During the info session I learned that the University of Chicago prides itself on the “life of the mind”, and boasts that their students are “constantly learning”. While this is generally true at every college, it is definitely emphasized here; between the info session and the tour the phrase “life of the mind” was used at least six times.

The University is home to around 5,000 undergraduates and an equal number of graduate students.   51% of undergrads are men, and 49% are women (which is quite different from the national average of 57% women to 43% men). Proximity to graduate schools yields numerous research opportunities for undergrads, which is pretty cool.  Nearly all undergraduates live on campus (housing is guaranteed for all four years).  Dorms are integrated, meaning that all classes live together–there is no “freshman housing” as such for first years.  Houses are administered by graduate student “resident heads” who we were told are “like your cool aunt and uncle”.  Having had a cool aunt and uncle, I know what to expect, and I suspect that the dorm staff at U Chicago would be a let down, but that’s just me.

For a school that emphasizes academics, the tour was remarkably disappointing–we were not taken into  any academic buildings, nor were we shown dormitories or libraries.  Maybe they don’t have libraries—no, just kidding; they have multiple libraries.  It would have been nice to see them first hand, but for now the website will have to suffice.

During the info session we were repeatedly told that, “contrary to rumor, the University of Chicago is not the place where fun goes to die”.  Emphasis was placed on the 400+ student organizations, and the fact that most students participate in athletics.  The University competes in the NCAA Division III University Athletic Association against schools such as NYU, Case Western, Washington U of St. Louis, and RIT.  Interestingly, we were shown the athletic center, pictured at right.  While no mention was made of this, fraternities and sororities appear to be an increasingly big part of campus life, with over 20 Greek organizations competing for student membership. About 8% to 10% of students are in fraternities and sororities.  We were also told about the campus-wide scavenger hunt that is an annual feat of competition, one-upsmanship and smarty-pants cleverness between the houses.

In addition to being one of the most selective universities in America, U Chicago is also among the richest, with an endowment of over $6.5 billion.  This financial stability enables them to be need-blind in admissions.  What this means is that the ability to pay has no influence on one’s admission.  Furthermore, the University guarantees to meet 100% of the need of domestic and international accepted students. According to the financial aid website, the average student receives $37,500 in scholarships. Additionally, their “Odyssey Program” guarantees to replace Federal loans with University grants for all families who earn less than $75,000 annually. Because of this, if for no other reason, outstanding students from lower income families should consider the University of Chicago; the chance to get a world-class education without going into debt is increasingly rare.

One other thing that I thought was noteworthy.  About half of students receive need-based aid, which indicates that the other half come from fairly well-off families.  As I mentioned, I took the bus to campus, and when I left the majority of passengers were not students (though it was a Saturday in June, which may not be a realistic basis for a judgement). During the tour, when asked how students get downtown, my guide said “it isn’t hard to get a cab” and “most students have cars”.  While this may have just been a personal idiosyncrasy, it led me to wonder whether there may be a sense of privilege among the University’s students and a reluctance to engage with the community.

As noted above there are two deadlines, November 1 for Early Action and January 2 for Regular Decision.  Applicants must submit scores for either the SAT or the ACT, and most accepted students score over 700 in each category of the SAT and over 32 on the ACT.  According to the info session, the high school transcript is the most important piece of the application portfolio; they seek evidence of students who took the most rigorous curriculum possible, with A’s and B’s and an upward grade trend.

For years, the University of Chicago was famous for it’s “Un-Common Application“, but now they welcome students to use the Common Application, but with a twist.  In addition to the standard Common App essay, applicants have three other written pieces to submit.  During the info session we were told that “60% or more of applicants look similar” (meaning that they are high achieving students with great test scores), and that the essays are the tool that the admissions office uses to help gauge the “fit” between the student and the school. The first supplemental essay asks “Why are you applying to the University of Chicago?”  They seek specific details and a high level of familiarity with the school.  This is further reason why a visit is advisable. An optional second supplemental essay asks students to “discuss your favorite things”.  This is a chance to go in depth about something the student has a passionate interest in.

The third supplemental essay is where the “Un-Common Application” still echoes.  It is a place for an extended essay on a very quirky, deliberately vague theme.  Some examples that were shared with us include:

Clearly this last essay is where creativity, cleverness and thoughtfulness will be at a premium.  In summary, if you apply to the University of Chicago, don’t save the essays for the last minute! 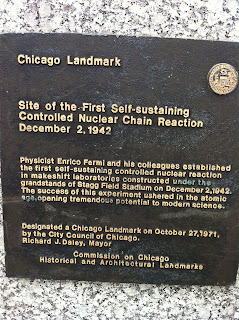 This was a very interesting place that cried out for a better tour.  Its history is amazing, the campus is lovely and they boast a faculty with eight Nobel Prize winners.  I have no doubt that it provides a good education, and Chicago is a great city in which to attend college. If you are considering the University of Chicago you should note that they encourage visits and interviews (alumni interviews can be arranged if travel is impossible).  Please share your thoughts about the University of Chicago in the comments below.  And good luck on your college search!