In early July, while passing through Ohio, I had the chance to visit Oberlin College. As I mentioned in my previous review of Case Western Reserve University, the students at the school where I work in Northeastern Pennsylvania are largely unaware of colleges and universities in Ohio; I hope these blog posts can help to change that. Please note that the following summary will mainly discuss the liberal arts experience at Oberlin; if you are a talented musician, and are considering auditioning for the Oberlin Conservatory, you will want to make sure to take a tour focusing on that experience.

Situated on a lovely, tree-lined campus in Northern Ohio about 35 miles west of Cleveland. Oberlin has a long history of commitment to equality and social justice; it admitted women and black students in the 1830’s, over a century before that was true in most of the country. Oberlin is known as one of the most “liberal” liberal arts colleges in America.  Having graduated from Hampshire College, which takes a back seat to no one in the contest for “most liberal” campus, I found Oberlin to be a welcoming, friendly place.  Despite some well-publicized harassment incidents in recent months, the college’s commitment to diversity and progressivism is unabated.

The campus is a mix of older and more modern buildings but it has a very cohesive feel. The bulk of the campus buildings are within a few blocks of each other in the heart of the small town of Oberlin (population around 8,000). There are also extensive playing fields and woods. Despite Cleveland being an easy drive away, it is apparently not a popular destination, because there is so much to do at Oberlin.  Over 500 (mostly free) concerts, 30 plays and 3 operas are held on campus each year, and with movies, sports, and more than 200 student organizations many Oberlin students find themselves challenged to take advantage of all the offerings presented to them. If you are worried that you will get cabin fever, don’t worry.  While cars are “actively discouraged” for first-year students, a large percentage of the student body have automobiles so you can probably get a ride from a friend.

The College is home to around 2,900 students, which means that Oberlin College is pretty much the biggest thing going in town.   55% of undergrads are women, and 45% are men (which is pretty close to the national average of 57% women to 43% men). Most classes are small (fewer than 30 students) and many have less than 10 students.  Classes are discussion based; my tour guide proudly noted that “professors challenge you to read and to speak” and that most Oberlin students eagerly rose to the challenge.  There is no core curriculum, though students must take two courses in each of three distribution areas (Humanities, Social Science and Natural Science).  The main library holds over 2 million volumes, and there are separate libraries for art, music and science.  The library is so central to the student experience that the college president holds weekly office hours there, which sounds pretty cool. 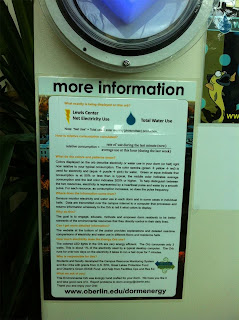 Oberlin students are very busy with their studies and extra-curricular activities.  Besides the normal semester schedule, they are required to do three “Winter Term” projects in January (though most do four). These projects can be academically or personally enriching, and can range from learning an instrument, traveling, or doing an internship. During one Winter Term, a student invented a monitoring system that shows at a glance whether the current water and electricity use of a building are above or below average. The displays are located around campus to encourage students to be aware of their use of energy resources.  Students can also apply to teach their own classes through the “Experimental College Program”, which is a very nice option.  I had the chance to teach a class during January Term when I was in college, and it was that experience which clarified my desire to become a teacher. 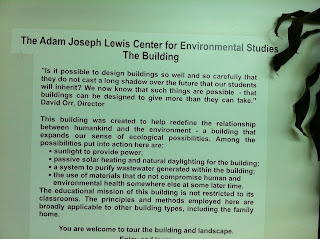 The learning and living facilities at Oberlin are excellent. The science building has more laboratory space than classroom space, and several buildings (including a dormitory and the music building) are LEED certified.  One really awesome space was the environmental science building. Primarily powered through solar electricity, the Lewis Center (no relation) also boasts a “Living Machine” which uses plants to recycle the building’s waste water.  As a result, the building is carbon positive, generating more energy than it uses.  The facility is run by students, who have launched a “poop campaign” paying their peers a quarter for every time they use the building’s toilets. As my tour guide pointed out, the quarters come in handy on laundry day, and you have to go anyway!

Most activities on campus are student run, and music is omnipresent, from the practice rooms to the recital halls to the radio station, to “the world’s largest collection of jazz recordings”.  There are 11 varsity sports each for men and women, including swimming and diving, track and field, and field hockey. Numerous intramural and club options also exist for people seeking to indulge their competitive urges. Varsity teams are part of the North Coast Athletic Conference and mostly play other colleges from Western Pennsylvania, Ohio, Indiana and Illinois 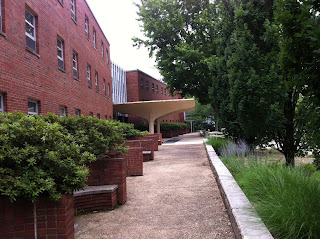 Oberlin requires students to live on campus for three years, but housing is guaranteed for all four years. The dorm rooms are spacious. There are three main dining halls on campus, which get 50% of their food from local sources. Additionally, about one-fifth of students participate in co-operative housing, or the “Program Houses” organized around languages or cultures where like-minded students can live.  In these houses students are responsible for cooking and cleaning and essentially for running the building. There is no explicitly “freshman” housing, so everyone lives together, which I find to be more healthy. Dorms are co-ed, and the bathrooms can be, too.  They have the very interesting “E-system”, which lets the current occupant of a restroom determine whether it will be for men, women, everyone or private during the duration of her/his stay.  Pretty neat!

One other amazing option at Oberlin is the art rental program. For $5 per piece, students can rent original artwork from the collection of the college’s art museum to keep in their rooms for the term. And I’m not talking finger painting here, but actual masterworks from Picasso, Chagall, Mapplethorpe and others. The program has been in existence for decades, and none of the pieces have ever been damaged or stolen, demonstrating the kind of trustworthy community fostered at Oberlin.

Oberlin College is a “most selective” institution, admitting about 33% of its applicants.  The College’s financial aid budget is a very healthy $57 million and aid packages average $35,000.  75% of Oberlin students receive some kind of aid. Oberlin is committed to meeting 100% of demonstrated need for all applicants, including international students (though there are fewer dollars for allocated for international students). As noted above there are three deadlines, November 15 for Early Decision I, January 2 for Early Decision II and January 15 for Regular Decision.  Note that ED programs are binding, which means that they are for students who consider Oberlin to be their number one choice.  Applicants must submit scores for either the SAT or the ACT, and most accepted students score around 700 in each category of the SAT (the writing section is ignored) and around 30 on the ACT.  Applicants use the Common Application, with an Oberlin supplement.

According to the admissions office, a range of students come to Oberlin, but the best fit is a student who is bright and intellectually curious, with a real love of the arts (visual and performing) and concern for the environment.  Oberlin students have a strong commitment to community service and “doing good in the world”.  Students who have demonstrated strong interest in Oberlin are preferred, so if you are considering Oberlin, a visit of your own would be a good idea. 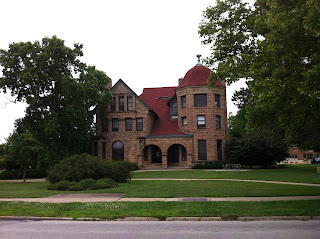 Oberlin is a very interesting school that would be a great place for the right student.  Its history is amazing, the campus is lovely and northern Ohio is a very nice place to live, with nearby Cleveland offering all the benefits of a major metropolitan area. Seek out Oberlin’s representative if they visit your school or local college fair, or schedule a visit to see the campus if you think you are interested.  I think you will be impressed. Please share your thoughts about Oberlin in the comments below.  And good luck on your college search!