In early April I was in Boston and took the time to visit Northeastern University. This was actually the second time I’ve toured Northeastern, the previous time being in the winter of 2008 (years before I started this blog), and I was interested to see what’s new at NU. I’ve been recommending Northeastern to students for over a decade–would I still feel positively about the university the second time around? Read on!

Northeastern University is located in the Back Bay area of Boston, not far from the Museum of Fine Arts, the Back Bay Fens, Fenway Park (home of the Red Sox) and Kenmore Square. I lived in that neighborhood in 1992-93, the year after I graduated college and was very familiar with Northeastern. In fact, most Fridays I would go to the MFA (which was free on Fridays) to look at the art, then walk across Huntington Avenue past some old houses and garages to go to the Northeastern University Hillel House. They were a welcoming community and gave me some needed social activity, as I only knew two other people in Boston at the time.

As I mentioned above, I did the tour and info session for Northeastern back in 2008 when I was a relatively new college counselor and was struck at the time by the the new construction and changes to the campus. Well, they must not have stopped, because the place is almost totally different now. The area where the Hillel House was located is now a bustling outdoor mall. One of the things I always liked about Northeastern is that it has a very coherent campus feel, even though it is located in the heart of a major city. The new developments, which include dorms on the other side of Huntington Avenue, and huge buildings for business, computer science, engineering and others, only accentuates that feeling. The admissions officer who led the info session described Northeastern as “77-acres that are a perfect blend of campus and city”, and it’s hard to argue with that statement.

Other differences popped up during the info session and the tour, some of which are based on my superficial observations while others are more concrete. Back in 2008, I visited Northeastern and Boston University on the same day (pro tip: these universities are very close to each other and could easily be done on the same day). At the time, I was working at a boarding school and my feeling was that the students at BU looked more like the kids at my school–preppy, clean cut, predominantly white. On the other hand, my impression of Northeastern in 2008 was of a more diverse, representative institution, where I saw more people who looked like America in terms of body type, skin color, ability/disability and other characteristics. An important point to make here is that in 2008, BU accepted under 30% of applicants and NU accepted around 50%. A decade later, Boston University accepts about 25%, but Northeastern has dramatically upped its selectivity, and the result was many more “preppy” looking students, at least to my view.

In what may be a related note, I felt that there was a considerable emphasis placed on athletics during the info session and tour–more than I expected, and definitely more than the people in my tour group seemed to want. The admissions officer made multiple references to the Red Sox (who are the defending World Champions, and the season had just started) and to the 18 Division I teams at NU, which makes sense, but he really emphasized playing and watching sports. In a very welcome twist, his co-presenter was “Angie” a “current, real-life” student in her third year. Angie was great, and had the chance to give the student counterpoint for every section of the presentation. Angie also mentioned sports several times, including a reference to the “Beanpot Tournament” which is an annual competition for men’s hockey teams at Boston schools. Later, our tour guide (a first-year student) made a point to tell about how exciting the Beanpot was, and how many sports options there are at Northeastern. I’m not trying to say that this was unwelcome, or weird or anything, but it seemed to be a notable point of emphasis. Do they emphasize sports because that’s what preppy kids like? I don’t know. Either way, my suspicion is that students who couldn’t care less about sports would still enjoy themselves at Northeastern.

Northeastern is full of opportunities for study; it is a Tier I research university with more than 50 research centers on campus. Students can choose from 175 majors including 120 interdisciplinary “combined majors”.  But the most significant feature of the academic program is the co-op program. At Northeastern, students typically alternate semesters on campus pursuing traditional college studies with semesters working at jobs related to their majors. These are not internships, but full-time, paid jobs and they can take place anywhere in the world. Several years ago, I knew a student who was studying the music business; one of her co-ops was with Massachusetts’ Rounder Records, but the other was working as a DJ at a radio station in Australia. The info session presentation touted Northeastern’s 3,350+ partners world-wide. Most interestingly is that Northeastern has a structure in place that lets students do two co-ops and still graduate on time.

I love it that even NCAA Division I athletes are expected to do the co-ops–in other words, far from being optional, co-operative education is the heart of what Northeastern is all about. I am a huge fan of co-ops, and I wish that they were a part of everyone’s college experience. We were told that 54% of graduates get a permanent job offer from a co-op employer, and that overall 92% of graduates are employed within 6 months, and 89% have a job in the field they studied at Northeastern.

During the information session we were told that applicants receive an “holistic review” with the most weight given to high school GPA (which is recalculated to a weighted, 4.0 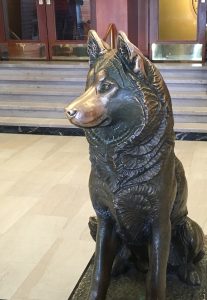 scale), standardized tests and the high school transcript (to see that students have challenged themselves with the most rigorous classes). Northeastern will also carefully read the counselor’s school statement to determine how “involved” the student has been in High School. Apparently, if you want to be a Husky, you need to demonstrate the following important characteristics: adaptability, diversity, engagement, an interest in experiential learning, and a global perspective.

There are a wealth of options to apply, including Early Action, two different Early Decisions, and regular decision. Northeastern accepts the Common Application as well as the Coalition application. Students must submit either ACT or SAT scores, and as the University’s selectivity has risen, so have average scores. The Common Dataset reveals that the mid-50% ACT score is 32-34, and the mid-50% SAT score is 1360-1540. In other words, 25% of applicants who submit SAT scores do better than 1540 out of 1600 (which depending on the test date, might mean only two or three wrong answers on the whole test)! I think that students who are serious about Northeastern will definitely want to make sure that they are well-prepared for standardized tests to give themselves the best chance.

Finance-wise, at nearly $65,000 per year for students living on campus, Northeastern is rather expensive. Note, however, that during co-op semesters students do not pay tuition, and while they can live on campus if their job is nearby, they don’t have to. Plus the jobs pay a salary, which can help mitigate college costs somewhat. Students seeking financial aid must submit both the FAFSA and the CSS Profile, but the payoff can be worth the effort. The university is proud of “The Northeastern Promise” which guarantees to fully meet all of a students’ demonstrated need for 8 in-class semesters. In the info session we were told that the aid includes the “NU Grant” which will never be reduced, but will increase if needed. As far as “merit” aid goes, apparently all applicants are reviewed automatically, and awards are offered to “typically the top 10-15% of applicants”, though the presenter did not specify how they determine how someone gets in that upper echelon.

I haven’t mentioned the tour too much, in part because our guide, while very enthusiastic, was in her first year at Northeastern and didn’t really have much to say beyond what we’d already heard before. But it was good to walk around to see the campus, which took us through several academic and social spaces on the south side of Huntington Avenue, as well as to the student fitness center and freshman dorms, which are on the north side.  The guide told us that students are required to live on campus for the first two years, and lottery-based housing can get students into dorms or apartment-style dwellings. She told us that the average size of upper level classes was 17, and that her classes this year averaged about 80 students; apparently the biggest intro class is for computer science, and it is routinely 250 or more students. There are three main dining halls on campus, and of course a limitless number of restaurants in easy walking distance, especially if one hops on the “T”, Boston’s public transport system. There is a green line train running down Huntington Avenue, and an orange line train station is right on campus. Interestingly, students only receive a slight discount on train and bus fares, which seems like a missed opportunity, especially when colleges in other cities will often give students free passes for public transport.

So–what did I think after revisiting Northeastern University? I like it even more than ever! It was great to see how much the university has continued to build and develop its campus, and very good to see that their investment in the physical space has also resulted in expanded educational opportunities for their students. While I am a little sad that the increased selectivity makes Northeastern more elite (if not elitist)–after all, only 46 institutions accept fewer than 20% of applicants–I hope that the increased financial stability they evidence allows them to continue to admit and serve talented students from all economic strata. Recently, one of my favorite former students transferred to Northeastern from her state university, and she has told me that she loves NU and is excited by her opportunities (she will be co-opping at Reebok). Also, my young cousin will be starting his first year at Northeastern in the fall, studying computer science. I am sure that he will be very happy there, and I am excited to hear about the educational experiences he will have.

A student with good grades and better than average test scores who likes to play and/or watch sports who is looking for a vibrant campus experience in an urban location would do well to consider Northeastern University. And if that student is at all intrigued by the promise of co-operative education, then I think this is an easy choice for her short list of schools to consider.