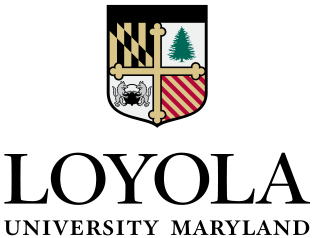 In early August I paid a visit to Loyola University in Baltimore, MD. While I had previously met with admissions representatives from the university when they came to my school, and had heard positive comments about the place from students and family members who attended there, I had not actually been to the campus. During my visit I attended the usual information session and took the standard tour and also had a chance to talk to the admissions counselor responsible for our geographic area. I came away very impressed with Loyola; it features a beautiful campus and its curriculum and philosophy of education are very appealing. I look forward to recommending Loyola University to my students. 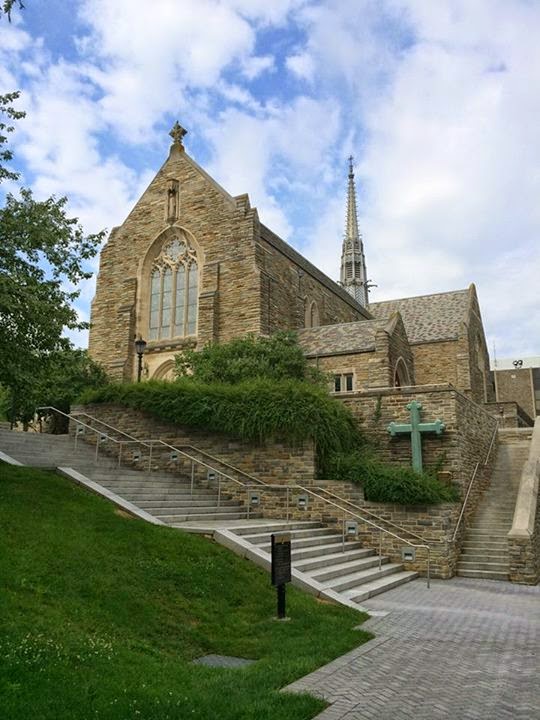 Loyola University Maryland was established in 1852 and moved to its current location (the Evergreen Campus) in 1922. It is the oldest of four Loyolas in America; they are unrelated, but they are among the 28 Jesuit institutions of higher learning in the United States. Like its fellow Jesuit colleges, Loyola places a great value on educating the minds, bodies and spirits of its students. About 70% of students identify as Catholic, 26 professors are Jesuit priests and Mass is held in the Chapel every day.  All students must take two religion courses to graduate, but the admissions officers and my tour guide (a rising senior from Baltimore who is a Quaker) made sure to emphasize that religious involvement was optional, and no one was pressured to participate. That said, there is a strong commitment to give back to society and help others; 80% of students are involved in some kind of community service efforts. 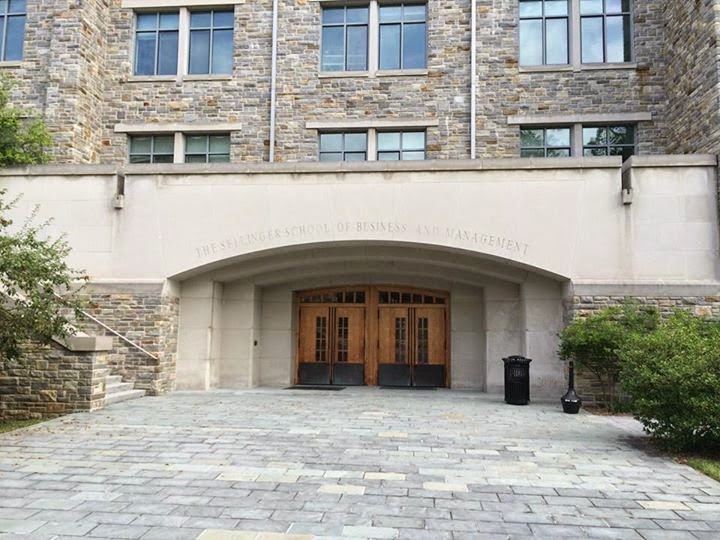 Loyola has a very attractive college located at the edge of the city of Baltimore, Maryland. It does not feel at all like an “urban” campus, though it is just a short walk from upscale restaurants and shops, and is a ten-minute drive from the Inner Harbor. Baltimore boasts over a dozen colleges and universities, with over 120,000 undergraduates making it a true “college town”. The consortium of all of these schools makes it easy to access academic and social resources at institutions such as Johns Hopkins, Goucher, Towson and others. 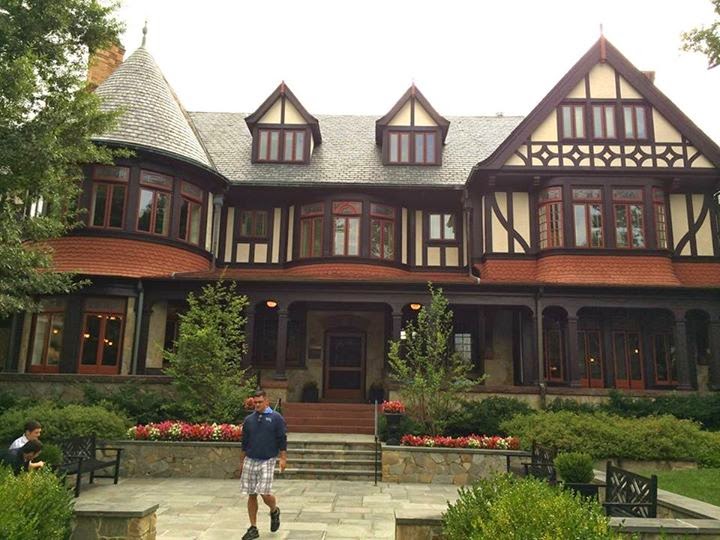 The campus is divided into academic and residential sections. The architecture is varied in both, but the academic section features lots of stone and steel, along with a beautiful Tudor-style building housing admissions, other administrative offices and several academic departments including history and philosophy.  There is an expansive quad with benches, trees and flower plantings. I was told that students use this for recreation during the year (Frisbee, etc). The entire campus appears to be very well-lit and is very walkable; I was told that it is a 7-10 minute walk from end to end. 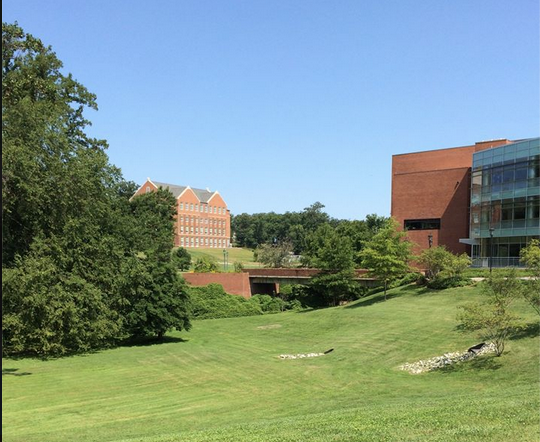 The residential section, which also includes the library, is more modern looking, but also features lots of green spaces for recreation. The library is a striking, modern building that underwent a $20 million renovation in 2008.  It is part of a consortium of libraries that gives students access to over one million volumes.  Loyola has a range of housing options. The dormitory space shown on the tour is the newest first-year student dorm; it features pairs of double-occupancy rooms with adjoining bathrooms.  It was perfectly adequate, though it didn’t knock my socks off.  That said, Loyola dorms are consistently ranked highly by the Princeton Review, coming in with the second highest-rated residence halls in America this year. The new food service provider also gets good reviews. Housing is not guaranteed for all four years, but apparently rooms are available for anyone who wants one. 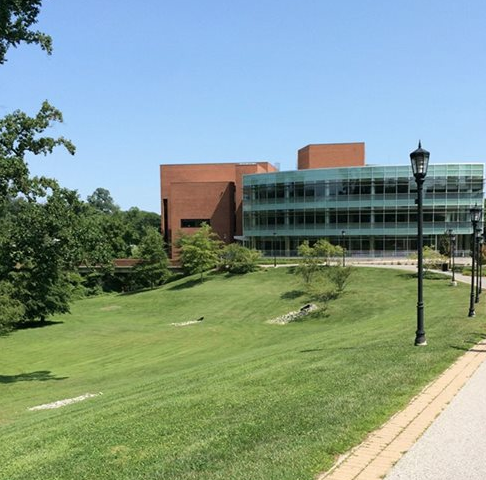 Most athletic facilities are about a mile and half down the road at a newly opened soccer/lacrosse stadium. Students can walk or run to the stadium, but shuttle buses circle the campus continuously through 2am to give a lift to anyone who would prefer to ride. To get around the Baltimore metro area, students can utilize the free Collegetown bus service (which covers the territory between Union Station in downtown Baltimore and the Towson Mall), and if they choose, the #8 and #11 city buses stop on campus as well.  While I was there I saw a bus or van every few minutes. For those who would like their own car there is ample parking on the fringes of the campus. Students (not first-years) can have a car on campus for $400/yr. However the college also loans automobiles for 3 days to students (unlimited milage) and will begin a partnership with Zipcar this year.

Loyola boasts a 12:1 student to professor ratio and no classes have more than 40 students. Emphasis was placed on the close relationships students have with their professors. Nearly two-thirds of Loyola students study abroad, usually during their third year. They are able to participate in over 75 different programs of varying duration all over the globe and 15 of them are all inclusive, meaning that whatever it costs them to attend Loyola will cover all costs of their study abroad program including travel. Some highlights of the academic program include “The Core“, “Loyola 101” and “Messina“. 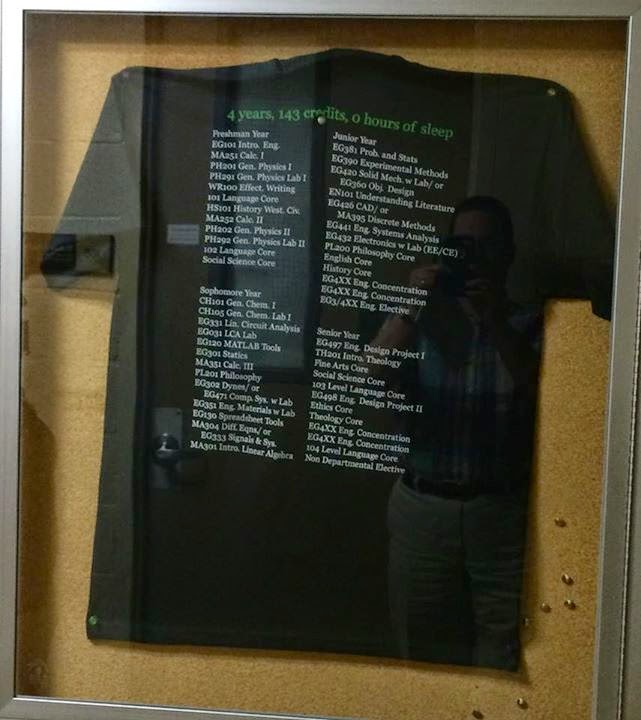 The Core comprises the liberal arts foundation of a Loyola education, during which students take 17 courses across all academic disciplines. Loyola does not require students to choose a major until the start of their fourth semester. Popular majors include:

One feature I found particularly useful was that students accepted to Loyola are automatically admitted to the schools of Business & Management, Education and Arts & Sciences; no separate application is required and students do not have to choose a school prior to matriculation. I think this would be a very good option for the student who (for instance) thinks she wants to be an engineer, but who may not have been able to take the most advanced math curriculum in high school.  That said, there is no doubt that students are challenged in their majors, as the amusing t-shirt in the entranceway of the science building attests. 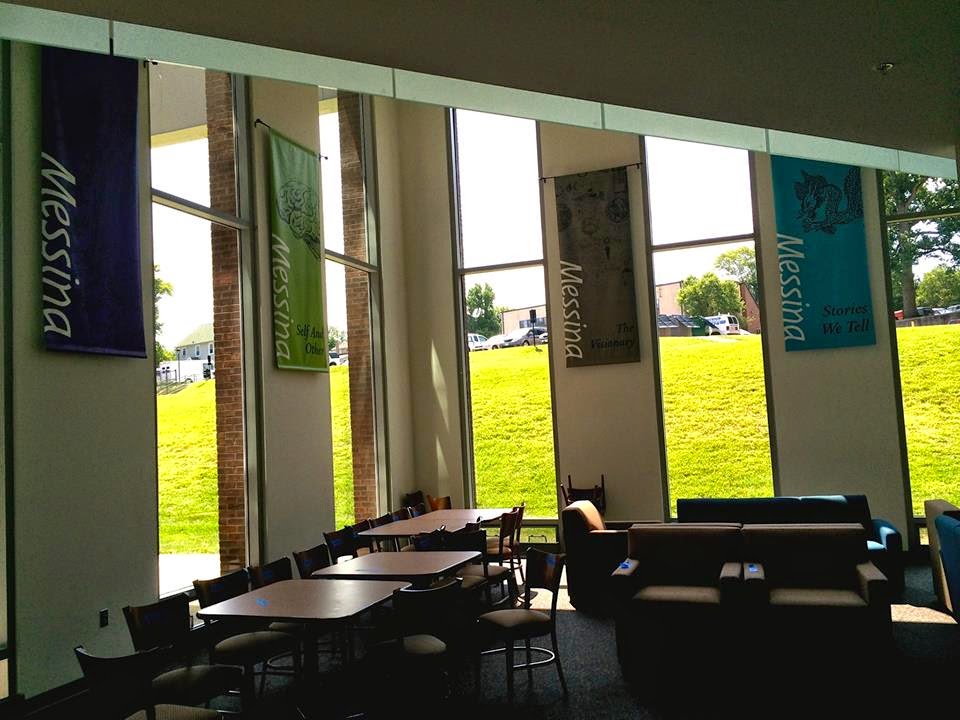 Loyola 101 is an option for first-year students.  It allows them to live together in the same dorms and be taught by their faculty advisors on topics such as life in Baltimore, Jesuit education and the adjustment to college. Messina comprises two courses (one in the Fall, one in the Spring) linked by one of three themes: “The Visionary”; “Self and Other”; and “Stories We Tell”.  Like Loyola 101, Messina students live together and at least one of the two classes will be taught by their academic advisor.

Loyola prides itself on a four-year graduation rate of 80%, which is excellent compared to the national average of 59%. For students who seek post-college professional programs, advising is available for Pre-Law, Pre-Med, Pre-Dental, and Pre-Vet; during the info session we were told that the acceptance rate to graduate programs is around 80%. Doubtless many of these students participated in internships during their college careers: 70% of Loyola students experience at least one and many have two or three prior to graduation. The Career Center works closely to help students find opportunities and 98% of 2012 graduates had a job or were in a grad program within 12 months of graduation. 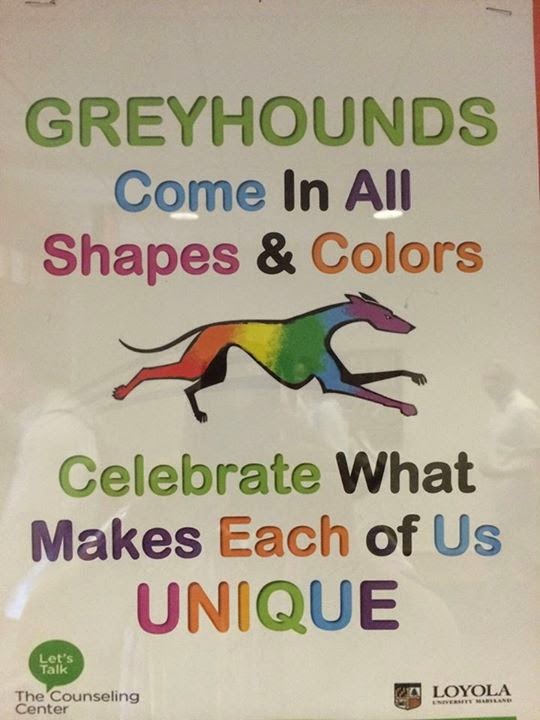 Loyola University accepted 58% of 13,800 applications last year to complete a first-year class of 1,100. The admissions staff is “small but mighty” consisting of only seven admissions counselors. Despite this, they work hard to provide a “holistic” review of the applications. Prospective students can use the Common Application or Loyola’s own application (with no preference given to either). Admitted students last year generally earned grades of B+/A- in high school with unweighted GPAs of 3.5. Emphasis is placed on high school grades and course rigor. Students are evaluated based on how they challenged themselves in their school curriculum. Advanced Placement test scores of 4 or 5 will earn college credit. Loyola is proud of its status as a “test optional” school where 30% of applicants do not submit standardized test scores (instead, an additional essay or teacher recommendation will suffice). Of the students who did send standardized tests, the mid-50% score for the SAT was 1140-1290 (critical reading and math) and 25-29 on the ACT.  Loyola does not consider the SAT writing score.

Loyola has three admissions programs: Early Decision, Early Action and Regular Decision. Early Decision (which will have its debut in 2014) is for students for whom Loyola is their unequivocal first choice; admission under ED is binding. Students applying ED need to get their materials in by Nov. 1st and will be notified by Christmas. The Early Action deadline is Nov. 15th; students will still receive early notification, but they will not have to commit to Loyola until May 1st. The Regular Decision deadline is Jan. 15th and they will be notified by the end of March. Last year nearly 60% of the class was built through the Early Action plan; while no one is willing to speculate what difference the addition of Early Decision will make, I think it is safe to say that students who are interested in Loyola should apply in November. Another incentive may be financial: notification of merit scholarship awards (typically given to A-/A students) comes with the acceptance letter and it stands to reason that more money will be available earlier in the process.

Loyola University is a good place for people who look to combine strong academics with service, and would be good for students looking for a “city” school as well as those who would prefer a more suburban campus. For students looking for the excitement of a mid-sized university with the close, mentoring relationships more typical at smaller colleges Loyola may be ideal. The chance to cheer on Division I sports teams could be appealing to a lot of students (though there is not a football team), and Loyola seems to be suffused with school spirit. Seek out Loyola’s representatives if they visit your school or local college fair; and if possible, consider a trip to Baltimore to visit Loyola and some of their neighbors. I think that you will find Loyola to be quite impressive. Please share your thoughts about Loyola in the comments below, and good luck on your college search!