At the end of June I had the chance to pay my first visit to the city of Cleveland, Ohio. While I was there I toured Case Western Reserve University (CWRU), and found it to be as impressive as its reputation would indicate. Working as I do as a college counselor in Northeastern Pennsylvania, I’ve found that many of my students tend to overlook the Buckeye State when researching colleges.  Based on what I’ve seen, I will encourage them to reconsider that approach in the future.  To quote legendary rocker Ian Hunter, “Cleveland Rocks“!

The campus features a surprising amount of green space, is bicycle and pedestrian-friendly, and is steps away from the Little Italy neighborhood and its many shopping and dining options. Students also receive free passes on Cleveland’s public transit system to facilitate travel to and from internships and other opportunities in other parts of the city.   For families concerned with safety, the campus police were out in force during my visit (on a Wednesday morning) and my tour guide said that it is held to be true that “you can’t go five minutes without seeing a campus police patrol”.  This definitely seemed accurate to me. In short, if you are looking for a relatively safe urban campus with easy access to a plethora of cultural, educational, and social experiences, CWRU may be for you.

The University is home to around 4,300 undergraduates and a little more than 6,000 graduate students.   56% of undergrads are men, and 44% are women (which is practically the opposite of the national average of 57% women to 43% men). Despite the size, about three-quarters of classes have fewer than 30 students, and 59% have under 20.  Classes with more than 30 students are videotaped and the video is available for up to five years to facilitate studying. CWRU emphasizes interdisciplinary learning and seminar style classes; in fact, students must participate in the SAGES (Seminar Approach to General Education and Scholarship) program for all four years, culminating in a senior capstone project.

Case Western students can study in the College of Arts and Sciences, the Case School of Engineering, the Bolton School of Nursing, and the Weatherhead School of Management. Each feature highly-ranked programs; during the info session we were told that CWRU has “the #25 ranked medical school, #12 program in family medicine, #9 program in social work, #8 program in health law, #13 program in international law, #8 program in biomedical engineering, #5 private nursing program, #15 accounting program and #1 finance program.”  I’ve previously noted that one should take college rankings with a grain of salt, but they are still helpful indicators of program reputation, if not quality. One should definitely dig deeper than these numbers, but I was impressed when they pointed out that nursing majors get twice as many clinical hours compared to the national average.  I was also intrigued by their “Spring II” course for Juniors: following a term-long exploration of a global issue, students accompany their professor for a 2 week trip to the country they studied. 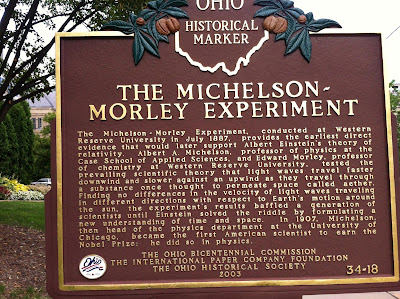 Case Western Reserve University is justifiably proud of its academic heritage; the Chemistry building has a large exhibit featuring all of the faculty members who have won the Nobel Prize. Their heritage of scientific discovery goes back over a century, and the Michelson-Morley Experiment is commemorated in multiple locations on campus.  They also have an apple tree that is a scion of the tree under which Newton supposedly sat when he began to conceive his theories of gravity. But they also have a sense of humor.  On the tour we were shown the physics building, which has the names of famous physicists prominently displayed over the windows.  We were told that the building was built before Albert Einstein gained international prominence, so his name is omitted; but across the quad is an Einstein Bros. Bagel restaurant to try to make up for it!

During the information session we were told that the university has over 150 student organizations, including 50 performance groups, 11 media organizations, 16 religious organizations, 24 multicultural and international groups, 20 community service groups and 22 fraternity and sorority chapters.  Nearly a third of all students participate in Greek life. Athletically, the Spartans compete in the NCAA Division III University Athletic Association against schools such as NYU, U of Chicago, Washington U of St. Louis, and RIT.  Inexplicably my tour guide did not show us any of the athletic facilities on campus, so I cannot comment on the gyms or sports fields.  The website gives some information, but if you are interested in sports or recreational athletics you may want to request a special tour of the facilities if you visit.

Case Western has multiple residential options.  Students are required to live on campus for the first two years. First-year students live in “residential colleges” organized by themes, such as “Growth Through the Arts”, “Knowledge Through Multiculturalism”, “Engagement Through Sustainability”, or “Leadership Through Service”.  I think that themed houses are a super option for college living, and I am very impressed that CWRU makes this available for their first-years.  It can be hard to move away from home to live with strangers; themed housing helps make it more likely that students will live with compatible people.

In addition to the residential colleges the new upper class dorms are LEED certified, featuring many energy-saving features and suites of 2 to 9 people. The dorms are spacious and well-equipped. One super-cool feature was the television screens in the lobbies of the buildings updating students on the current status of the washers and dryers in the laundry rooms, as well as the arrival times of the local buses.

CWRU is a “most selective” institution, admitting just under 40% of applicants.  Over 80% of students receive need-based aid, which is made possible by an endowment of over $1.5 billion. As noted above there are two deadlines, November 1 for Early Action and January 15 for Regular Decision. Applicants must submit scores for either the SAT or the ACT, and most accepted students score between 600-700 in each category of the SAT and between 29-33 on the ACT.  Applicants use the Common Application, with a Case Western supplement.

According to the admissions office, a range of students come to CWRU, but the best fit is a student for whom academics are the top priority, seeking a campus that is “urban, but not too urban”.  Case Western students are focused, and very few come as “undecided”; while many change their minds over time, approximately a quarter of incoming students arrive planning to be pre-med or nursing majors. People who want to explore multiple areas of study are welcomed and encouraged; Case Western Reserve University prides itself on giving lots of freedom to its students. 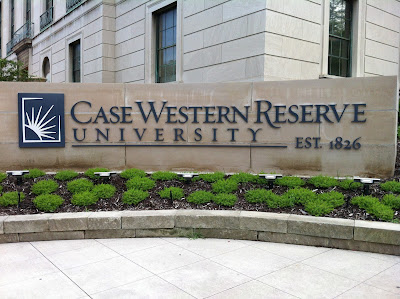 This was a very interesting place that seems to have something for everyone.  Its history is amazing, the campus is lovely and boasts seven libraries with millions of volumes; the main undergraduate library has 60 miles of books!  Cleveland is an underrated and often ignored city, but it has a lot to offer. If you are considering Case Western Reserve University you should note that they encourage visits; in fact they find that the enrollment rate is much higher for students who visit than for those who do not.  I’m sure that part of this comes from seeing the great location and facilities first-hand.  Please share your thoughts about Case Western Reserve University in the comments below.  And good luck on your college search!