Skip to content
On September 24, 2012, the College Board released a 43 page long report entitled “The SAT® Report on College & Career Readiness: 2012“.  For people like me (who love to look at and analyze data to try to observe trends) it is a very interesting and useful resource.  Some of the interesting information one can find in the report includes:
I should make clear from the outset that I am philosophically opposed to all kinds of standardized tests, as I am convinced that the people who do well on these tests are good test takers, not necessarily good students.  And to it’s credit, the “SAT Report…” goes to great lengths to address this concern.  On page 5 they note that, “Research shows that the SAT along with high school grades is a highly effective combination for predicting how well a student will perform in college.”  On page 8 they include information from the National Association of College Admissions Counselors that puports to show that standardized test scores are not the primary measuring tool used in college admissions:

Despite these protestations, the College Board is definitely concerned. Headlines in major newspapers discussing  the “SAT Report…” loudly proclaiming “SAT Reading Scores Hit A Four-Decade Low” are bad publicity for education, the nation’s young people and the test itself.  1.66 million of  the students who graduated in the class of 2012 took the test, up from 1.56 million four years ago.  And those extra test takers are not helping lift the average, as the data below indicates (all scores are on a range between 200-800): 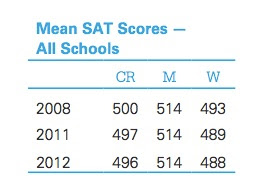 In fact, the trend has not been very good for quite sometime.  As you can see from the data below, scores have been stagnant or falling since the turn of the millenium.

Considering that many schools are required to use standardized tests to demonstrate that they are achieving “Adequate Yearly Progress” as mandated by the No Child Left Behind Act, it must be alarming to see a large sample set (over one and a half million) provide evidence of a decline rather than an improvement.
Unfortunately, there is a pretty obvious answer for why this phenomenon has occurred.  According to the Census Bureau, the number of people living in poverty has increased from 31.5 million in 2000 to 43.5 million in 2009 to 46.2 million people in 2011. While the population has increased over that time, the poverty rate has grown disproportionately (thanks to two major recessions) from 11.3 % in 2000 to 15% in 2011. Worse still is the fact that the poverty rate for children was a staggering 21.9% in 2011.
The reason why these numbers are relevant to a discussion of standardized tests (especially the SAT), is that there are only two proven factors that correlate with success on the SAT.  First is practice: on average, people will see a 40 point overall increase the second time they take the test.  The second is household income: children from wealthier families do better than those from poorer families.  In fact, since the SAT costs $50 per test (though fee waivers are available for poor kids through their college guidance office) it stands to reason that better-off kids can afford to take it more often.
The data is quite stark.  This chart from the Washington Post clearly demonstrates the advantage of wealth on the SAT: 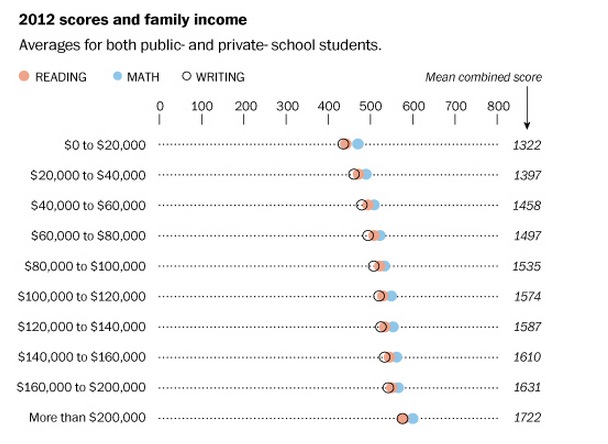 While it doesn’t make sense to compare medians to means, if we look at the above data, it would seem  that a student from a family earning the median income in the US ( $50,054 in 2011), might be likely to score somewhere around 1450 on the SAT.  The national average SAT in 2012 was 1488, not that far off.   And overall, the median income is 8% lower than it was before the Great Recession began in 2007.
With the increase in income inequity in America and the corresponding decline in average household income, the fastest growing part of the population is in the lowest income brackets.  The SAT Report…” indicates that 22% of test takers last year received fee waivers (which are typically only given to families who are eligible for free lunches at public school), and that 46% of them came from families where English was not the first language (p. 15).  The likelihood that students from that income bracket will achieve the kinds of scores that will gain the attention of elite colleges is quite low, and English as a Second Language (ESL) students are not likely to score highly in the Critical Reading and Writing sections of the SAT.
Before you lose all hope and dismiss the SAT as a rigged game in favor of the 1% (which would not be a correct conclusion), the “SAT Report…” prefers to note that there is another factor that has a direct correlation with high test scores–taking AP and/or Honors level classes in school.

But on the other hand, that is also misleading.  According to the College Board itself, only about a third of high schools in America offer AP courses.  So it is reasonable to believe that many of the other two-thirds are schools in poor neighborhoods, with poor students and overloaded teachers who are not able to offer small classes for the top achievers.  I guess it really does all come down to location, location, location.
It is hard to read this report and come out feeling positively towards the SAT.  While one can hope that the dedicated professionals working in the nation’s college admissions offices are aware of the income discrimination built into the SAT and are trying to find ways to compensate for it when making their decisions, it may not be true.  After all, it is in the best interests of a college to demonstrate that their incoming class has high SAT scores—that is part of the formula for high rankings in lists like that of US News and World Reports.  Ultimately, I rest my optimism on the increasing numbers of colleges that are joining the National Center For Fair and Open Testing (FairTest.org) choosing to be “test-optional”, providing a way for people with low standardized test scores to get an unbiased look from college admissions offices.  Over 850 colleges have already agreed to go test-optional, including several large, well-known and highly ranked schools.  Perhaps someday enough schools will join FairTest to cause a tipping point, and the CollegeBoard’s test will either change, or slip back into the margins.