At the end of June I was in Chicago, and while I was there I paid a visit on DePaul University.  I didn’t know too much about DePaul (besides it’s famous basketball history), and no students from my school have applied there for four years, so this seemed like a good opportunity to learn more about DePaul. I really enjoyed my visit; in the following paragraphs I will provide a summary of the information presented at the information session, along with pictures I took during my tour.
DePaul has two primary campuses; the main undergraduate campus is in the Lincoln Park neighborhood of Chicago, while some of the graduate programs are in the heart of downtown Chicago’s Loop district.  Lincoln Park is on the North Side of Chicago, one neighborhood south of Wrigleyville, home of the Cubs.  Every student spends time at both campuses; to facilitate this start time for classes at the two campuses are staggered by 40 minutes to allow students to travel from place to place.

The Lincoln Park campus has a large “Welcome Center” which houses the undergraduate admissions; the admissions office in the Loop is for graduate students and transfers.  In addition to the large lecture hall pictured at right there is an expansive seating area (with complimentary beverages) and tons of literature about each of DePaul’s majors. 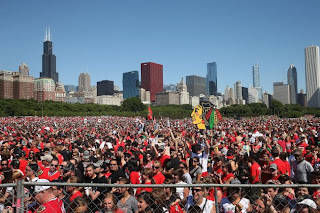 I visited DePaul on June 28, 2013, which also happened to be the day of the Chicago Blackhawks Stanley Cup victory parade. According to reports, more than a million people flocked to the Second City to celebrate; I don’t know if this made the audience at DePaul bigger or smaller, but there were around 60 people at the 2:00 info session, and the group was broken up into 6 different tour groups.  Only one of the visitors was wearing Blackhawks gear, which was not the case in the rest of the city!
During the info session I learned that DePaul is the largest Catholic university in America, with an undergraduate population of over 16,000 and total enrollment of around 25,000.  The presenter also made sure to point out that the university is “among the most diverse” schools, with 32% of the student body being people of color.  DePaul was founded in 1898 by the Congregation of the Mission, and is named for St. Francis de Paul. Like their namesake, the university places a strong premium on community service.  They are proud of having over 100 community service programs, and there is an office on campus devoted to helping match students with the right programs.  In addition, many  courses have a community service component.
This commitment to service is serious.  Students “with an exceptional record of community service” will be invited to apply for one of several community service and leadership scholarships of $8,500.  Please note that scholarships are only available to students who apply Early Action!In addition to these scholarships, I was struck by a truly unique (in my experience) housing option.  Each year a small group of students is given free room and board to live in the Vincent and Louise House. As it was explained during our tour, these students open their doors to the community, and feed anyone who comes in.  It must take a very special person to be so dedicated.  Many students at my school volunteer at the St. Vincent de Paul soup kitchen in nearby Wilkes-Barre, but this is several steps beyond that.  My hat is off to those young people who “live simply so that others may simply live”.

At the undergraduate level, despite having 16,000 students, DePaul prides itself on professors teaching 100% of the courses–no classes are taught by graduate teaching assistants.  In the info session we were told that the average class size is 17.  During the tour, on the other hand, we were told that in certain areas (such as the humanities) the average could be more like 25-30.  Supposedly no class is larger than 70.  When I was a graduate teaching assistant at Purdue University in the 1990’s, we had history classes of over 300 people, so in comparison 70 is pretty reasonable.
You can see the areas of study listed above; students do not have to declare a major until the end of their second year and 45% enter “undecided”.  Some highlights that were mentioned included a 5 year BA/MA program in the College of Education (where students begin their fieldwork in the first year); pre-med, pre-vet and pre-dental programs in the College of Science & Health; and the College of Computing and Digital Media, which is the “largest in the country”.  DePaul bills itself as the “most transfer friendly” university in Illinois, and they “love AP credit”.  45% of students do an internship prior to graduation; to help with this, there are generally no Friday classes. DePaul is organized on a “quarters” system, as opposed to the traditional semester system.  There are four 11-week long quarters (summer is optional); as a result, students take 8 more classes over four years than their peers at colleges with semester schedules.  This helps many students to double-major or to have a minor in addition to their major. 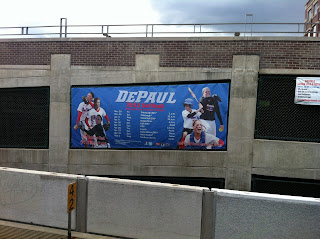 Sports-wise, DePaul is well-known for their basketball programs (men and women); they do not have a football program.  As a varsity softball coach, I was pleased to see a very large sign near the multi-sport stadium that houses softball and soccer advertising the DePaul nine (who made the Big East semi-finals this year. The Blue Demons (whose name is an interesting choice for a Catholic school) offer 6 varsity teams for men and 7 for women.  In addition to the Division I athletic programs, DePaul boasts numerous other activities, including club ice hockey, and esoteric clubs such as the skydiving team (“Freefall DePaul”) and innertube waterpolo (“The Sassy Seahorses”).  Recently there has been some controversy over the $300 million new basketball arena that will open downtown in 2015.  Critics decry the $100 million contribution from a city that is closing dozens of schools and firing hundreds of education professionals.  But to be fair DePaul is also opening a brand new library and a “state of the art” new theatre building in 2013; so the institutions priorities are reasonably straight.

The Lincoln Park campus is compact, covering 8 square blocks and is only a 12 minute walk from end to end.  It is in a residential area and there are shops nearby, but it is not what I would consider a “destination location” like the Loop (where DePaul’s buildings are all within a couple of blocks of each other).  Students are given passes on the Chicago Transit Authority trains and buses which helps them to take advantage of their location in one of the greatest cities in the country.  On-campus housing is limited, optional and not guaranteed; as mentioned above, less than 20% of students live in Lincoln Park or the Loop (where the university students occupy 5 stories of a high-rise shared with other colleges).  Only 75% of freshmen live on campus. Lockers for commuter students are located throughout campus, which must help a little.

The Lincoln Park campus features a very nice student center that houses offices for student organizations, lounges (with more lockers), a small chapel and several very attractive dining options. The meal plan is good for $1000/quarter but the money does not roll over–as a result students often come in for binges at the end of the term to use up the money in their accounts.  Speaking of student accounts, DePaul students get $12 worth of printing per quarter on network printers. That works out to 15,000 pages per quarter, or in English: there is no need to bring your own printer! Another helpful service is a campus shuttle service that runs from 6pm to 6am; this can be a great benefit on a cold Chicago night! 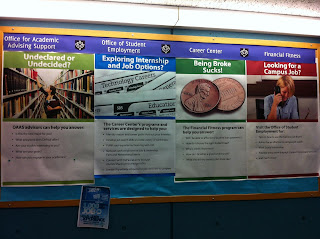 DePaul seemed like a very friendly, welcoming helpful place. While this should be expected in admissions offices, it is not always the case.  In addition to the admissions staff, I saw friendly smiles in every building.  As we left the science building, we were joined by an older woman wearing the uniform of a food service worker.  She heartily welcomed us to DePaul and asked if anyone on the tour was a science major.  When nobody replied in the affirmative she said what a shame it was that she wouldn’t see us, but she urged us to come back and “visit Miss Brenda anytime”.  I love those kind of interactions, as they are genuine and human and also indicate that the school might be a nice place to work (or at least has happy employees).
As noted above there are two deadlines, November 15 for Early Action and February 1 for Regular Decision.  Early Action is for students who really have their act together, because the deadline is, well, early!  Remember though, that most merit scholarships are awarded to EA applicants, which could serve as incentive to get started quickly (though there are still some funds available for students who meet the regular deadline).  De Paul is test optional, meaning that standardized tests such as the SAT and ACT are not required.  That said, the average SAT of students accepted in 2012-13 was 1100-1200 (Critical Reading and Math), or 24-28 on the ACT.  Students applying test optional must complete four supplemental essays, which can be time consuming and challenging, but is a great choice for good students who do not test well.  DePaul uses the Common Application and they place a lot of weight on the essay(s).  They consider the transcript to be the most important part of the application and look for an upward grade trend throughout one’s high school career.
If you are interested in visiting DePaul you should note that they encourage “customized visits”.  On a customized visit the prospective student is given a CTA pass, access to the dining service, sits in on classes and gets a meeting with a professor of their choice.  DePaul is worth a visit.  I look forward to telling my students about this school, which I now consider to be something of a “hidden gem”.  Please share your thoughts about DePaul in the comments below.  And good luck on your college search!