Ever since I was a kid, one of my favorite daily rituals has been reading the newspaper. Nowadays, I rarely actually read the news in its “dead tree” format, but on a daily basis I do visit the websites of the following newspapers: the New York Times, the Guardian, the Washington Post, the Citizen’s Voice and the Times-Leader (both of Wilkes-Barre, PA), and Philly.com, which compiles articles from the Philadelphia Inquirer and Daily News. I also read news commentary from the Atlantic, Slate, Salon, and the Huffington Post.  I know that seems like a lot, but what can I say?  It keeps me off the streets. One thing that I have learned from reading multiple news sources is that there are always several ways to look at a given subject, and one should never just blindly accept what one reads.    Just this morning I came across two articles that reminded me of this.

As I’ve noted previously, in my day job I am a college counselor and American history teacher at Wyoming Seminary College Preparatory School in Northeastern Pennsylvania. I am frequently called upon to tell my students how fortunate they are to grow up in a family that expects them to go to college, because most Americans do not pursue formal education after high school; this always surprises them.  While I do not usually have to justify to my students the reasons to go to college, I do find myself dealing with lots of concern that college will not lead to meaningful careers.

On June 13, 2013, the New York Times published an article by Catherine Rampell headlined “Data Reveal A Rise In College Degrees Among Americans“.  I think that this article is quite interesting, but in some ways too optimistic. In my discussion of the article I will include excerpts (since people who don’t subscribe to the Times have limited access to the paper), but feel free to read the full article if you can (and also take some time to read the hundreds of responses submitted by readers).

The lede of Rampell’s article is:

The number of Americans graduating from college has surged in recent years, sending the share with a college degree to a new high, federal data shows.
The surge follows more than two decades of slow growth in college completion, which caused the United States to fall behind other countries and led politicians from both parties, including President Obama, to raise alarms.
Last year, 33.5 percent of Americans ages 25 to 29 had at least a bachelor’s degree, compared with 24.7 percent in 1995, according to the National Center for Education Statistics. In 1975, the share was 21.9 percent. The number of two-year college degrees, master’s degrees and doctorates has also risen recently. 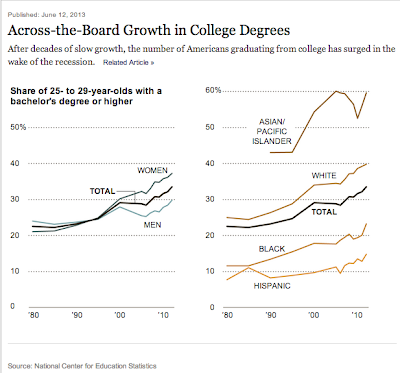 So, based on the introduction of the article, it would seem that Americans under 30 (the segment of the population most likely to still be pursuing their educations) are 8.8% more likely to have a bachelor’s degree than they were 18 years ago; and furthermore that this is a positive development to be welcomed by Democrats and Republicans alike.  Leaving aside the fact that the parties seem to have trouble agreeing on anything, even education-related topics like student loan interest rates, digging deeper into the story shows that things are a bit more complicated.

The rest of the article analyzes the numbers on the basis of economics, focusing on issues such as unemployment rates, the correlation between income levels and educational achievement, and forecasted changes in the job market.  Some of the points raised make sense, but others struck me as either not going far enough, or being dubious.

One of Rampell’s major points is that the weak economy of the past half-decade has impelled people to seek temporary refuge in higher education:

The recent recession, which pushed more workers of all ages to take shelter on college campuses while the job market was poor, has also played a role.
“Basically, I was just barely getting by, and I didn’t like my job, and I wanted to do something that wasn’t living dollar to dollar,” said Sarah O’Doherty, 24, a former nail salon receptionist who will graduate next month from the County College of Morris in New Jersey with a degree in respiratory therapy. “After I had my son, I wanted to do something I felt passionate about, to have a career.”

Rampell also goes on to point out that the historical trend of higher education equating to lower unemployment is still ongoing:

Many economists point out that college graduates have fared much better than their less-educated peers and argue that rising educational levels will help the economy in the long run. Since the recession began in December 2007, the number of Americans with bachelor’s degrees who have jobs has risen by 9 percent, while employment has fallen for everyone else.

The unemployment rate for graduates of four-year colleges between the ages of 25 and 34 was 3.3 percent in March, according to the Bureau of Labor Statistics. For high school graduates in the same age group who had not attended college, it was 11.8 percent.

This is important information, and (while it might not be relevant to Rampell’s article) it might help to know that this is not new–the correlation between education and unemployment goes back for years, as demonstrated in this table from the Federal Reserve Bank of St. Louis: 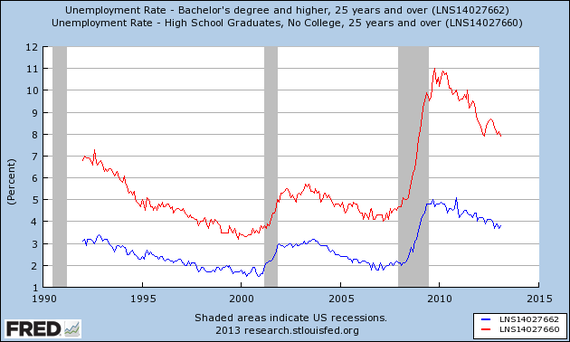 Furthermore, it is still the case that one’s income will typically rise along with one’s education:

But having said that, it is also increasingly likely that recent college graduates are “underemployed”.  A Wall Street Journal article from March 30, 2013 points out that over a quarter of a million college graduates are working minimum wage jobs.  While the number of such people has decreased since the peak of the Great Recession, it is still remarkably higher than the numbers from just a decade ago.  In other words, today’s college graduates are more likely than their older siblings to get a job for which they are over-educated and underpaid. 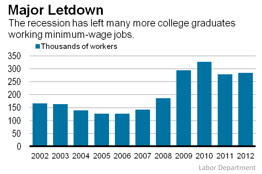 In fact, a recent survey by Accenture reveals that 41% of Americans who graduated college in 2011 and 2012 are working in jobs that do not require a college degree. According to the survey, 32% of these college graduates earn less than $25,000 per year, and 44% live at home with their parents.  And when this year’s graduates were surveyed in March, only 16% indicated that they had already landed a job.

Rampell seems to ignore these negatives.  In fact, she seems eager to argue the opposite.  At the end of the article she discusses changes in “21st century employment” that call for a more educated workforce (the same things we’ve been hearing since Bill Clinton first ran for President 21 years ago):

Today’s premium for college degrees is caused partly by increasing selectiveness among employers about whom they hire and screening based on education even for positions that do not require higher skills. But jobs themselves have changed, too.
“Think about jobs 15 years ago that didn’t need any college education,” said Sandy Baum, a senior fellow at the George Washington University Graduate School of Education. Many of them now do, she added.
“Maybe you don’t need a bachelor’s to change bedpans,” Ms. Baum said, “but today if you’re an auto mechanic, you really have to understand computers and other technical things.”

I think that Rampell and Ms. Baum are living in a fantasy world.  In fact, our friends at the Bureau of Labor Statistics are pretty clear in their projections–at least 12 of the 30 fastest growing industries do not require significant education levels. 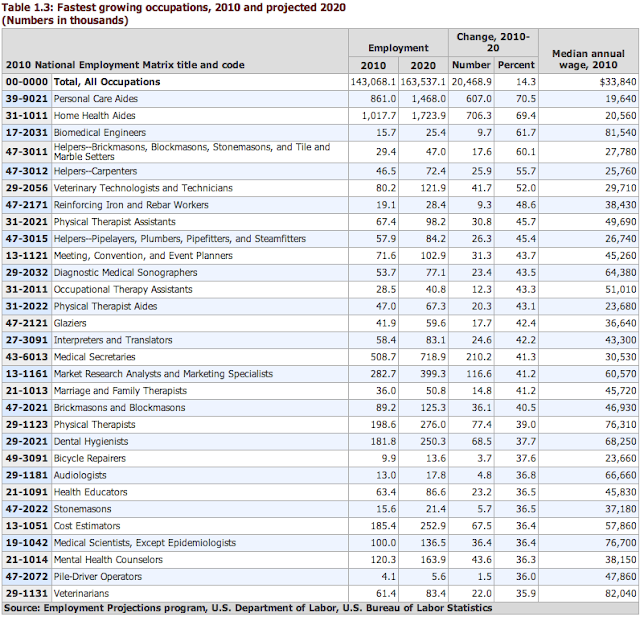 And what about the specific example provided in the article?  Is it true that auto mechanics need to “understand computers”?  Well, yes, but it does not mean that they need a college education.  In fact, the BLS is pretty clear in stating that they do not.

Rampell’s overriding point is that “The trends could bring good news in future years, economists say, as more Americans become qualified for higher-paying jobs as the economy recovers.” But the data do not totally support this.  Leaving aside the question of just what a “recovered economy” will mean in the 21st century, when I look at the fastest growing jobs listed above, it seems like they can be broken into two categories: either health care or skilled and semi-skilled labor.  Those don’t sound like the kind of jobs that are going to help my college counselees who are going to school to study history, or the classics, or business, let alone, those entering school with the most common major (undecided).

One of the most talented students I’ve ever taught just graduated last month from one of America’s top universities. This student was so good at so many things that she had difficulty choosing a major, and ultimately settled on anthropology, all the while worrying about what kind of job prospects she would have. At this point she has no solid options for post-college employment, and is temporarily moving back home. She had a fantastic four years at her dream college, learning things and making friends that will enrich her life for years to come. But now that she has to enter the economy, she is (at least for now) just another statistic. So while it is wonderful that more people are pursuing higher education, it is not necessarily an unalloyed good. People should not look at college as the guarantor of a good income. Especially for those families that go into debt, it is important to recognize that the time it will take for the economic benefits to match the intellectual benefits of college can be considerable.