At this time of year (mid-October), most college-bound seniors are still finalizing their college lists and putting the finishing touches on their applications, while juniors are (correctly) focusing solely on having  their best year in and out of the classroom.  But looming in the distance for most families is the question of how to pay for college. 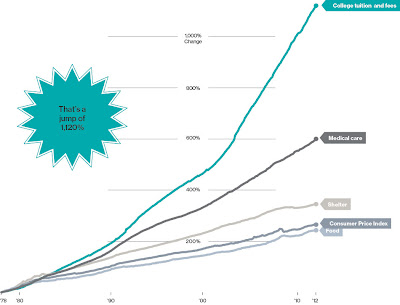 The cost of attending college is increasing at a phenomenal rate (over 8% per year).   Most private colleges have substantial amounts of so-called “merit aid” available to discount the sticker price and attract talented students, and nearly every college in America is eligible to receive need-based financial aid funding for American citizens from the U.S. government. Many students, however,  find that they and their families need to take out loans to help pay for their educations.   In fact, 2/3rds of college students who graduated in 2011 had student loan debt, with an average debt of $26,600 per borrower, according to the Project on Student Debt. The following are five points about student loans that may help you to evaluate your financial aid options. 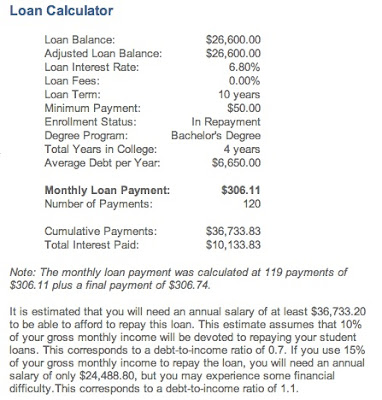 1) Student Loans Are A Serious Obligation: While this might sound obvious, student loans must be paid back.  While some (Stafford) federal loans are “subsidized”, meaning that interest only accrues post-graduation, the vast majority of student loans accumulate interest from the day the payment is issued.  But since students typically do not make loan payments while in school, it is often the case that when seeking a first job, they need to factor in a considerable loan payment in addition to rent and other fixed costs.  For instance, that average student with $26,600 in debt might face a monthly payment of $306.  According to FinAid.org, you would need to earn a yearly salary of at least $36,733 to be able to comfortably afford to pay this back.

Generally speaking, student loan debt is not a particularly bad form of debt.  Unlike, say, a car or a house, it is impossible for your creditors to repossess your education.  But on the other hand, student loan debt is the only kind of debt that cannot be relieved through bankruptcy.  If you fail to make your payments, creditors can legally garnish your wages and even your Social Security benefits.  Naturally, most college students are optimistic about the future and expect to make a comfortable living.  But it is vital to be aware of future loan obligations when choosing your field of study.  An entry-level job on Wall Street might be able to generate a salary that can handle your debt, but a job as a barrista at Starbuck’s probably won’t.

2) Not All “Student Loans” Are Created Equal: There are three different categories of loans: Federal student loans, parent loans (sometimes known as PLUS loans) and private (sometimes known as alternative) student loans.  Federal Student loans are either Stafford (the majority) or Perkins (rarely) and are based on family need as assessed by the Free Application for Federal Student Aid (FAFSA).  To further confuse things, Stafford loans can be subsidized or unsubsidized. The maximum amount of these loans is capped by law.  If more funding is required, parents can borrow money through the PLUS program; there is no legal limit on how much a parent can borrow under this program, and PLUS loans have a fixed interest rate.  If parents (or students) would prefer to try to shop around for better rates, or would like different repayment terms, many banks and other lending institutions are willing to loan money to help pay for college.  But students especially should beware of the risks of these loans:  they are not subsidized, the industry is not regulated, and failure to repay the loans could have a serious impact on your credit score, which can follow you for years.

3)Student Loan Debt Has A Huge Impact On The Economy:  According to Bloomberg BusinessWeek, in 2010 student loan debt exceeded credit card debt; in 2011 it exceeded auto loan debt.

With student loans reaching such a large amount, they effect the economy in many ways.  One way is beneficial: the higher the level of academic achievement, the higher the salary earned, and the more likelihood of being employed.   The chart below, from the Bureau of Labor Services shows these correlations directly:

obviously based on this information, it is a prudent investment in oneself to go to college, and it may be wise to incur some short-term debt to help ensure long-term success. 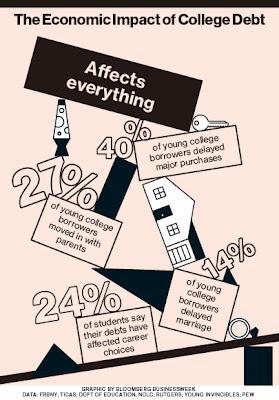 On the other hand, as we saw above, the costs of repaying student loans can be considerable, and if loan repayments crowd out other consumer purchasing they could be considered an overall drag on the economy. As seen in the chart at right, many purchases and major life decisions (ranging from where to live, when to marry and what career to pursue) are impacted by the need to repay loans.

4) Student Loans Are Like Potato Chips–It Is Hard To Stop At One: Many students from lower or middle class families will accumulate some student loan debt in college, perhaps even up to the $26,000 range mentioned above.  But in many cases, the limits on Stafford loans can protect students from incurring unhealthy amounts of debt.  But when students consider graduate or professional programs, the picture changes dramatically; due to the higher limits for this level of education it is conceivable that a person could go from college to law school and wind up in an entry-level job with over $138,000 in debt.  Considering the increasingly bleak job outlook for law school graduates, this is alarming, to say the least.

Since limits are even higher for medical school, it is not unheard of for a young doctor to enter her practicing career with over a quarter of a million dollars of student loan obligations to repay. 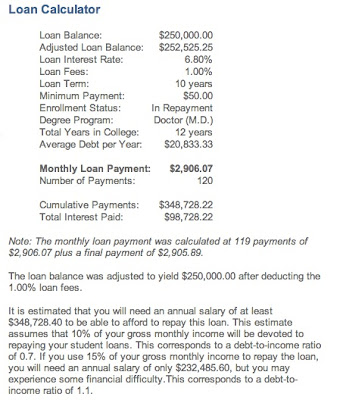 The chart at left shows the debt load of a young doctor–it is dramatically different from the example seen above!  Considering the bad economy and the temptation of high paying professional careers, many students enter college planning to follow their four-year undergraduate career with several more in graduate school.  But keeping the costs of loan repayment in mind makes it crucial to weigh future earnings carefully; based on this chart, a young doctor would need to earn over $348,000 as a starting salary.  But based on Bureau of Labor Statistics figures, that is extremely unlikely.

5) Knowledge Is Power: In my job as a college counselor at a private high school in Pennsylvania, I have noticed an increasing number of students making college choices based on finances.  Students at our school are very successful in gaining admission to the colleges of their choice, but (especially since the start of the Great Recession) many have ended up matriculating at their second or third favorite school due to a more attractive bottom line cost. If a student is planning to pursue a graduate degree, or is interested in a major with less readily apparent connections to jobs (say, philosophy, or English literature), families should keep the idea of loan repayments in the forefront of their minds when choosing colleges.  Also, not all financial aid awards are equal.  As of 2012, every college is required to have a “Net Price” calculator on their website. These tools should allow an applicant to get a preview of the kind of scholarships and aid they can expect from the college, including loans.  When families are gathered around the kitchen table deciding what colleges to apply to, it is well worth the effort to compare the information on these calculators.  Some schools expect families (parents and students) to take out a considerable amount of loans.  Some people have advocated that we stop calling loans “financial aid”, but for now it is wise to educate yourself about this form of debt. Finally, educate yourself about recent changes in the law that can help people in certain professions discharge their loan debt ahead of schedule. The more you know, the better informed you will be when deciding where to go for college, which for many people will be the most expensive thing you will ever buy.

Please feel free to add comments to this blog below.  I would love to hear from you!